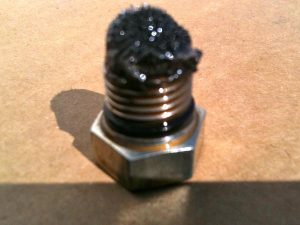 DO YOU WANT THIS IN YOUR VICTORY MOTOR?***One magnetic drain plug included. 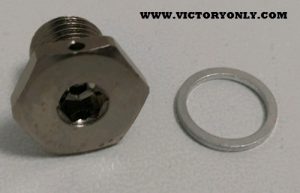 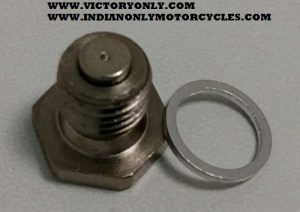 Since the Victory machine has only ONE drain plug for the wet sump which houses and lubricates the Engine, transmission and primary chain case……It is of the utmost importance to have a Dimple® M12X1.5X12R Super Magnetic Drain plug installed to pull out all the metal contaminants that the oil filter cannot get out!
When you think about it, it is about the only thing you can do to Extend the like of your Victory Motorcycle.
In Victory’s case…….One plug will do it all!

THE STRONGER THE MAGNET THE CLEANER THE OIL

“The stronger the magnet, the cleaner the oil”

2. these tiny metal particles are measured in microns

3. a micron is one millionth of a meter

4. all the contaminates cannot be removed by the oil filter

5. an oil filter can remove particles larger than 35 microns

7. if not removed this contamination is circulated millions of times between each oil change, polishing (wearing) down the metal until the engine is worn out.

8. there is still residue left in the engine, even after an oil change

9. so new oil in the engine, does not mean, non contaminated oil

11. at dimple® products we are here to educate

12. then provide a solution that works all the time

1. dimple® products uses extreme magnetism to rip the metal particles out of your oil and keeps it out

2. all magnets are not created equal

3. dimple® magnets are made under contract to insure that they are always what we say they are, the strongest high temperature grade  neodymium magnets in the world

6. the nature of dimple® specified magnets makes them last a long, long time. The formula for figuring out how long your Dimple® Magnet will last is: Our magnets degrade 1/2 of 1% every one hundred years!!!!!

We guarantee they will work for your lifetime.

Don’t delay, your engine is in harms way! 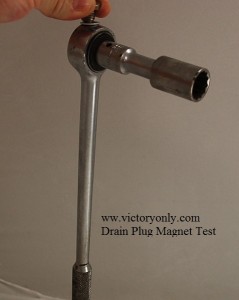 Victory Only Motorcycle carries the largest stock of performance mods, upgrades, custom equipment gear, apparel, OEM replacement and aftermarket parts and accessories for Victory Motorcycles with international worldwide shipping to Canada, UK, CZ, GB, Australia and anywhere a Vicory Motorcycle rider wants to do it yourself customizing of a show quality bike. If you are looking for Chrome or Black Contrast Cut billet aluminum accessories. Just shop Victory Only and Owens Cycle Works website for retail purchases or dealer wholesale orders for Victory’s parts.