Hand Deflectors are an easy-to-install solution for keeping your hands warm and dry.

Coupled with a windshield (sold separate), hand deflectors protect the rider from wind and rain.
Do you hate chilly and damp hands? Does the riding season seem too short? National Cycle Hand Deflectors are an economical solution for extending the riding season.

Hand Deflectors are easy to install. They secure to your bike’s mirror mounts, yet allow plenty of room for lever movement and for riders with large gloves.

Hand Deflectors come in two sizes and are application-specific to ensure the correct fit for your bike.

These deflectors make a windshield function like a fairing. Deflectors allow plenty of room for lever movements, even when wearing winter gloves. 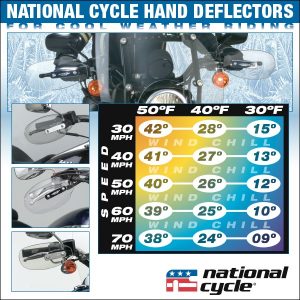 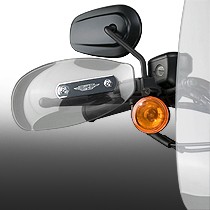 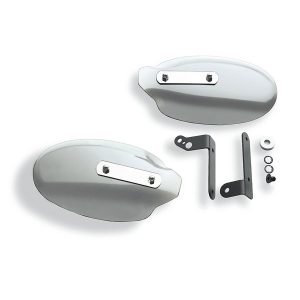 Customer review
Review by Don Edwards “I had a pair of your Hand Deflectors on my Honda® Valkyrie that probably saved me from some serious injury. Riding along at 60mph, I saw this blur to my right that was the head of a deer just as it hit my right Hand Deflector. I already knew that the Deflectors were great at keeping off the rain and cold wind but, in this case, they also protected me from DEER FACE! There was this bang as my Hand Deflector broke off in the collision. The impact also broke off my mirror and rotated my front brake lever at an upward angle. Luckily, the bike didn’t go down, but the deer did.

“I ended up with a bruised hand and some minor cuts. It would have been much worse if I had not had the Hand Deflectors installed on my Valkyrie. When my buddy pulled up along side, I asked him about the deer. He said it was lying in the ditch back there. I asked him to retrieve my mirror and when he returned, he said the deer was gone. I hate to think what would have happened to my unprotected hand if I did not have the National Cycle Hand Deflectors. Some serious damage, no doubt. True story!”

customer review 2
“Last evening I took the bike for a short (10 mile) ride on some back country roads for the first time this season. It was near dusk and the temperatures were near 40 degrees. The road conditions were not all that good for a high speed run, with loose gravel at nearly every intersection, but I did manage to maintain enough speed to test the effectiveness of these devices and much to my surprise, they worked just great! My hands were warm while the rest of me was not. I can’t wait to tell my biker friends about them.”